A white elephant for a struggling nation

Since 2012, the government of the Dominican Republic has promoted the Punta Catalina coal plant project to meet its energy needs, even though it will have to import the coal necessary for the operation of the plant, and despite the fact that national law requires the progressive phasing out of coal. The plant was expected to generate one-third of the country’s energy needs, and was touted by the government as a “low cost,” short-term solution to the country’s energy crisis. In the end, the project proved to be by far the most expensive energy project in the country’s history, costing over two billion dollars.

EDLC’s partners, the Instituto de Abogados para la Protección del Medio Ambiente (INSAPROMA) and the Comité Nacional de Lucha Contra el Cambio Climático (CNLCC), filed a lawsuit asking the court to order that the proposed plant be adapted to use natural gas instead of coal due to environmental and health concerns. EDLC submitted a supporting legal brief. The case was dismissed on highly technical procedural grounds, and the dismissal was upheld on appeal.

The case would have been like many others challenging controversial development projects, but for the story of the bribery and ongoing efforts of Odebrecht, a giant Brazilian multinational, and the government of the Dominican Republic to cover up the project’s illegalities. It is a cautionary tale of extreme corporate greed and corruption, and a government’s complicity in corporate crime.

Odebrecht agrees to the largest corruption fine in legal history

Since 2013, Odebrecht has been under investigation by numerous national governments for dozens of acts of corruption it committed around the world. By the company’s own admission, in 2015, it moved the headquarters of its international bribery operations to the Dominican Republic. Odebrecht’s former Chief of Operations in the Dominican Republic provided sworn testimony that in the case of the construction of the Punta Catalina plant, Odebrecht paid an intermediary a fee of $2 million for successfully obtaining the approval of project financing by bribing members of the Dominican National Congress.

In a 2016 Plea Agreement with the U.S. Department of Justice, Odebrecht admitted to paying $788 million in bribes in association with more than one hundred projects in twelve countries, including over $92 million in corrupt payments to government officials and others in order to obtain public works contracts in the Dominican Republic. Overall, Odebrecht agreed to pay a fine of $2.6 billion under the Foreign Corrupt Practices Act, a fine that the Department of Justice described as “the largest foreign bribery case in history.” 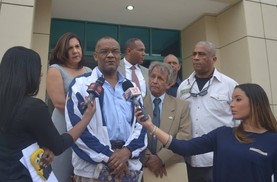 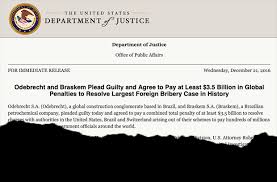 Odebrecht fails to learn its lesson

Odebrecht’s admission of guilt was widely reported in the Dominican Republic and generated unprecedented protests, with thousands of people taking to the streets every month demanding the cancellation of any existing government contract with Odebrecht, particularly the Punta Catalina project. The protests have continued to this day.

Yet Odebrecht has had the audacity to both continue to work on the project—in clear violation of Dominican law—and to seek reimbursement for massive cost overruns. Incredibly, the 2017 Plea Agreement it entered into with the government of the Dominican Republic over the same bribery did not prevent the company from continuing to build the Punta Catalina plants under its bribery-tainted contract, as should have been the result under Dominican law. The plea agreement even misstated the applicable sanctions for the bribery under an additional law, ignoring the requirement that Odebrecht’s operations be closed or supervised by the government. Odebrecht must have known about both the disregard of the first law and the misstatement of the second law, but went along with it nonetheless.

Then, in July 2017, Odebrecht charged the Dominican government an additional $708 million dollars for alleged cost overruns on the project. This demand was based on what appear to be modified contractual clauses that Odebrecht in 2014 managed to have included in what was originally to have been a fixed sum contract.

The Dominican Attorney General subsequently excluded the Punta Catalina case from the list of Odebrecht projects to be fully investigated for corruption in relation to Dominican politicians and businessmen. He neglected to mention that the bribery investigation excluded government officers involved in all contracts from 2012 onward, the very year that the current administration came into office. He also announced his remarkable conclusion that while Odebrecht had bribed legislators and Dominican officials in order to obtain sixteen other public works projects in the country, the company did not pay a bribe in relation to the seventeenth and by far the largest project—Punta Catalina—even though Odebrecht’s head of operations had admitted under oath to doing exactly that.

Time to re-open the investigation?

In the summer of 2019, EDLC enlisted two powerhouse law firms—the international firm Hausfeld, and the Washington D.C. firm Stein Mitchell Beato & Missner—to alert the U.S. Department of Justice to Odebrecht’s ongoing violations of U.S. and Dominican anti-corruption laws. At the very least, there are serious questions requiring investigation as to whether Odebrecht’s conduct in the Dominican Republic following the 2016 Plea Agreement violates the company’s commitments under that agreement, and what’s more, as to the company´s willingness to change its history of corrupt practices undertaken on an unprecedented scale. Under the terms of the 2016 Plea Agreement, Odebrecht is obligated to cooperate fully in such an investigation. The people of the Dominican Republic are continuing their protests, and are eagerly awaiting the response of the U.S. Department of Justice.

All Cases in Mesoamerica